REGISTER FOR A PROGRAMME 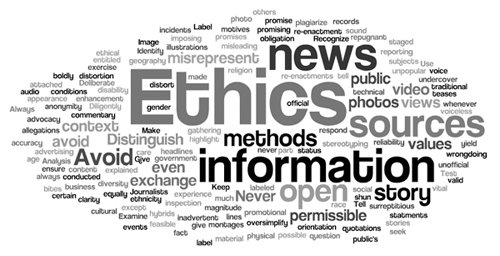 Ethics can be loosely defined as the study of standards of conduct and moral judgment. It can also be the system of morals of a particular person or group. When incorporated with the media; it is a study of those things that journalists should think about before acting, that is, the reasoned standards of the journalism

Journalists in their daily work are facing decisions about what they
should or should not report, and most of these decisions can legitimately
be described as decisions about appropriate behaviour-in short, ethical
decisions.

People who work in the areas of print, broadcasting, public relations, and new communication technologies need to think about appropriate behaviour and about the perception society has of them and of what they seem to be doing. Ethics researcher Marianne Allison stressed that public perceptions of the role of occupation are as important to its professional success as actually occupying that role. If the public thinks the journalist is biased, then the story will be neither credible to them nor regarded as an honest effort to get at all sides of the issue.

Unfortunately, ethical deliberations of journalists still are largely “technical and procedural”-they tend to be concerned more with the production standards of their industry than with moral codes for behaviour. They
do often ponder the moral implications of their reports but do not evaluate
what they observe and do as ethical behaviour.

Perhaps it is because of this lack of sensitivity that government officials
as well as private individuals sometimes want to exclude the news media. For example, the Baba Ijesha case ( A Yoruba actor was caught on CCTV defiling a minor) was poorly handled by several media organisations, one of such organisations taught it “right” to disseminate the video of the act across its social media platforms and this received several backlashes from the government and private individuals.

A witness to the rape incident, Princess also an actor, denied giving authorisation to the media outlet to publish the content

Reacting through a letter signed by her lawyer, Ibilola Subair dated Sunday, 2nd May 2021, “We are solicitors to Princess Damilola Adekoya (Comedian), hereinafter referred to as our client and on whose behalf we issue this notice to the general public.

“Our client did not authorize the release of the CCTV footage by Punch Media or any other person whatsoever.

“Our client expressly disclaims any liability whatsoever for any loss, however, arising from the content of the CCTV footage released to the general public through Punch Media.”